Oral Cancer 2021: Lumps, Bumps and Lesions for all Seasons:

This course deals with unusual cases, diagnostic challenges, the oral health effects of tobacco products and alcohol, premalignant and malignant lesions, and new diagnostic techniques. Tobacco advertising will be exposed and the link between human papilloma virus and oral cancer discussed.

This course will be presented in Dr. Svirsky's interactive and entertaining style. Get ready to laugh, learn and make a major difference in the lives of your patients.

Learning Objectives:
- Develop a logical approach to the recognition and diagnosis of premalignant and malignant lesions.
- Understanding the risk factors associated with the development of oral cancer.
- Enticement of tobacco advertising in tobacco addiction 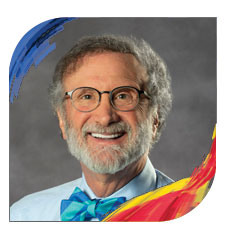 Dr. John Svirsky is a board certified oral and maxillofacial pathologist at Virginia Commonwealth University (VCU) in Richmond, Virginia. He received his dental degree in 1973 from VCU and went on to complete a general practice residency at Long Island Jewish Medical Center/Queens Hospital Center, as well as an oral pathology residency at the Catholic Medical Center. He is currently a professor of oral and maxillofacial pathology and maintains a private practice in oral medicine and oral pathology. Dr. Svirsky has developed a broad background in research, published numerous articles in the dental literature, and earned a masters degree in adult education. He is a sought after speaker with an international reputation as an informative and entertaining lecturer. Dr. Svirsky is an honorary member of the Thomas P. Hinman Dental Society and has received a Presidential Citation from the American Dental Association for significant contributions to the health of the public and the profession of dentistry. In 2012 he received the William J. Gies Award from the Greater New York Dental Meeting for contributions to oral health. The MCV Alumni Association (MCVAA) of Virginia Commonwealth University has chosen Dr. Svirsky to receive the 2013 MCVAA Outstanding Alumnus Award. In 2015, Dr. Svirsky received the Distinguished Service Award from the Dawson Academy for advancement of the Dental Profession through Reseach, Publication, and Education and awarded an Honorary Membership in the American Academy of Oral Medicine.